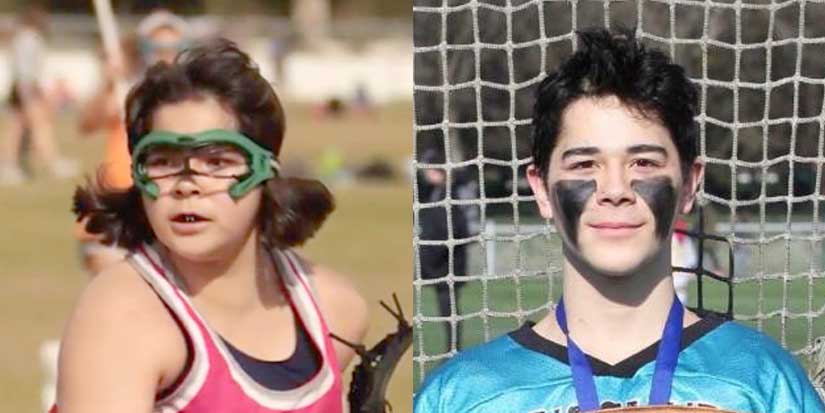 Lardens leaders on the field of play

Adelle and Scott Larden spend a lot of their time in the sporting arena, routinely demonstrating qualities exemplary of champions.

Not only are the two Hwlitsum First Nation members from Richmond leaders merely by their actions, but inspirations for those around them.

“More than ever, we need young people like you to give us hope,” said Melanie Mark, British Columbia’s Minister of Tourism, Arts Culture and Sport of the pair, who are among the recipients of the Vancouver Coastal regional 2020 Premier’s Awards for Indigenous Youth Excellence in Sports.

Both excelling in lacrosse, 14-year-old Adelle and 16-year-old Scott were instrumental in their respective teams enjoying undefeated seasons.

Their skills are equally proficient in other sporting pursuits including judo and soccer.

Described as humble, Adelle loves listening to her elders—notably her grandfather and great uncle—share stories of her First Nation ancestry, and credits family and friends for their support in helping her achieve success in sport.

Going out of his way to help others, Scott demonstrated his commitment to his team by enduring months of rehab to return to play following ankle surgery. He hopes to play lacrosse at university.

Due to the pandemic restrictions, the regional awards celebrations could not be held this year. As a way of honouring this year’s recipients, a series of commemorative videos highlighting each of the region's athletes and celebrating their outstanding achievements was produced.

The Indigenous Sport, Physical Activity & Recreation Council (I·SPARC) is a provincial organization established with the purpose of improving the health outcomes of Indigenous people by supporting and encouraging physically active individuals, families, and communities. The programs and services delivered by I·SPARC are designed to build capacity and increase access to sport, recreation, and physical activity in First Nations, Métis Chartered Communities, Aboriginal Friendship Centres, schools, and other delivery agencies throughout British Columbia.

Gifted Kennedy a wizard on the court

Catch the Sockeyes for $5

Ravens relentless in pursuit of success

Braaten steps down from baseball helm

Cohen committed to the net

Bradley staying on track amidst a crisis

Sockeyes’ Araki-Young playing for the love of the game

Richmond to welcome the hockey world at Parade of Athletes

Set to race in worlds, Dunfee up for national award

CARHA reaches out to community through special CAN night

Olympic Oval remains a lasting legacy of the 2010 Games

Best in B.C. gather for softball glory in Richmond

Hope on the horizon for local swimmers

United growing in leaps and bounds

Haddows reflect on the gridiron life

Sockeyes preparing, as usual, for season ahead

Kasey hits all the ‘Wright’ notes

RYBL: Hooked on hoops
KidSport Week: Celebrating getting kids into the game

Bowling strikes a chord with the Imoos

Sockeyes will begin No. 50 at home

Coach Jack hangs up his cleats

Stecher shines for Canada at worlds

Chan steps up for Canada

Sport BC to recognize unsung hero in Sadana

Dunfee steps up for the kids

Race walker Dunfee a champion on and off the track

Lardens leaders on the field of play

Richmond front-and-centre at BC Games

Richmond athletes shine at BC Games

Kajaks’ mentor steps aside, but not from running

Ravens' coach is also a Devil of a player

Strikers mine silver on BC rugby pitch

WHL teams give nod to Seafair Bantams in draft

Alaska has long history of curling at PIC

Bodies of family from India found dead trying to cross into U.S. by fo...

Mayor fears Rocky Mountain coal-mining concerns will be ignored after...

Crowds gather in Ontario and New Brunswick to cheer on parts of trucke...

RCMP station in Surrey, B.C., evacuated after grenade turned in

Government not extending review of lithium company takeover a 'mistake...

CRA to send out new round of letters checking eligibility from CERB re...

Avenatti now representing himself in case vs. Stormy Daniels

COVID-19 booster drive is faltering in the US