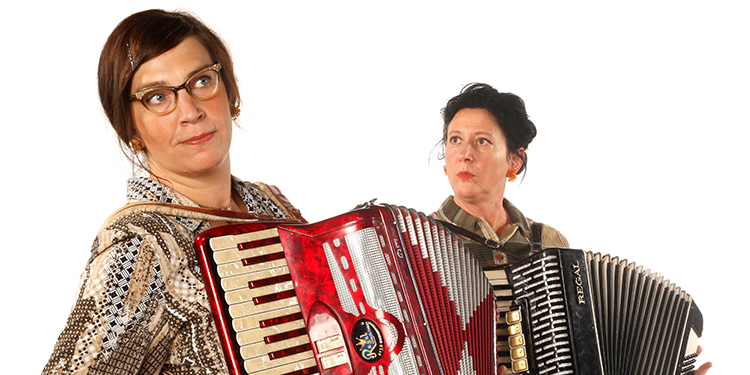 With a cast of 15 strong actors, Les Belles-soeurs offers a view of women’s lives in Quebec before the Quiet Revolution that changed everything. Gateway’s latest offering features Michel Tremblay’s 1965 Canadian classic in John Van Burek and Bill Glassco’s English translation. It is produced by Ruby Slippers and directed by the award-winning Diane Brown, whom audiences will remember from last season when she directed the moving and humorous You Will Remember Me.

Les Belles-soeurs kicks off Gateway’s 2018-19 season with ribald humour as a group of women assemble to past prize stamps into their booklets so the woman who won the million stamps can redeem them for gifts from a catalogue, much as we do electronically with reward miles today.

The show-goers had two advantages; there were more volunteers again so that patrons could be shown to their seats and as we were seated we were treated to French Canadian songs played as duets by two accordions on stage. It added to the atmosphere and theatre-goers felt all the more welcome.

community volunteers add to the warmth and the feeling of support for our community’s theatre. It is much the same at Bard on the Beach where the nightly contingent of nightly volunteers is vast, warm, intelligent and welcoming. Everyone is directed to their seat.

The show was sold out with only Coun. Chak Au’s seat empty. He was introduced but a no show.

The play began with the dynamics of a neighbourhood and a family living in poverty, under the rule of the Catholic church and as second class citizens as Francophone-Canadians were in those days, are amply displayed through Tremblay’s writing and the performances.

The set was flexible and set the scene in a down in the dumps apartment building in the 60s. The lighting and sound were good throughout though with one performer, she was hard to hear when she wasn’t facing the audience. The montage of old radio shows further set the scene and the era.

Two stand-out performances were Lucia Frangione. Normally a woman of grace, her character, Marie-Ange Brouillette, was coarse and blousy. A totally believable performance in both her actions and her body language.

The other stand-out was Patti Allan as Rhéauna Bibeau. Allen shows why older actor should be cast; they have their full palette of skills. Her character sang out vividly from the stage and propelled the play forward magnificently.

One thing not in the control of the Gateway team is the audience’s behaviour. We have a row of four people behind us, young adults who spent most of the performance chatting and opening crinkly packages. At one point, a young man said when a character on stage said she had some news, “She’s pregnant.” Not even a spoiler alert.

Richmond actor, Beatrice Zeilinger, spoke with the Sentinel before the production and said the play “talks about oppression, these bleak lives of these extremely Catholic women, these contained lives they live, lives limited by religion and the mores of the day and by their class and education or lack thereof,” she says. Her soliloquy as Rose Ouimet was magnificent.

Lest the play sound too dour, Zeilinger assured, “There is a lot of humour in this play.” And there was. Allen’s timing, in particular, was snappy and heightened the humour.

Zeilinger says, “My first thought when I got the part was that I was excited to work with Diane (award winning director, Diane Brown) again because I’ve worked with her a number of times in the past decade. It’s a big cast. There’s a fine group of actors and production artists involved in this production.”

The fine group of actors had moments when all on stage spoke in unison. While not my cup of tea, it was done with precision and great diction, no mean feat.

As the play ended, the audience roared to its feet. The enthusiastic applause commanded two curtain calls.

Afterwards, the crowd stayed to discuss the play, meet the theatre company and enjoy nibbles from the Sheraton Airport Hotel and Anna’s Cake House. The crowd around the food tables was at times three deep as people waited to sample the scrumptious fare.

Another stand-out was the staff at the bar. Not your usual, just get people through sort of group, they went out of their way to be gracious and helpful. They too are to be applauded.

Local actor shines amid myriad of stars at Bard

Richmond-raised Ajaye Jardine rising up the country charts in Nashville

“KISMET” play shares wisdom on how to cope

Teasing out the hidden

How is a mother to cope?

Metro Theatre shows what 'A Bunch Of Amateurs' can do

The magi among us

High tea and high art blend for a fine time

Richmond Music School reaches out in its 40th year

Taylor-made for the Grand Prix of Art

Theatre that teaches our hearts

The show goes on: Richmond Music School finds ways to make music during the pandemic

Frankenstein: when hurt leads to anger

Deeply connected to Richmond’s past, Mînowin looks to the future

Wade finds his calling in the theatre

Fourty-four characters offer a Dickens of a tale

Art that feeds the body as well as the soul

All's Very Well at Bard on The Beach

Many to thank for success of Grand Prix of Art

A cup of seasonal cheer and a Christmas-ish miracle

Affordable fun at the Cannery for summer Friday evenings

Arts in Richmond at the heart of annual awards

Create your own mini at-home play with Gateway kit

Production star lives quietly among us in Steveston

Get creative at the Richmond Children’s Arts Festival

Rolling into the future

Forget the action movie, try Bard on the Beach

From admin to full-time artist

Mother and daughter bond over art

Richmond Orchestra and Chorus Association: A noteworthy organization to support

Easter a time for reflection

Even online, ROCA still sharing the magic of music

Sense and Sensibility at Cap U

Saying yes to opportunity in Canada

A titanic exhibit at Lipont Place

Meaningful laughter is a piece of cake at Pacific Theatre

Music is good for the soul

‘Ring of Fire’ celebrates choral music of the Pacific Rim

The Positivity Project: Staying positive during the pandemic

Grand Prix of Art a gift to the community

From middle class to internment camp

Calling all artists to Converge!

Major music acts to perform at Ships to Shore festival

Theatre in all its Glory

Summer nights swing at the Cannery

As real as it gets

Whose heritage is it anyway?

Women elevated in the arts in Minoru Chapel series opener

A Christmas Carol comes to Gateway

One million chickens euthanized during labour dispute at Quebec slaugh...

Canada to accept donation of one million Moderna vaccine doses from th...

Commons committee calls for reshaping of EI to cover gig workers, self...

The latest news on COVID-19 developments in Canada on Thursday, June 1...

UK records over 10,000 virus cases for first time since Feb

Ex-President Gbagbo back in Ivory Coast after acquittal

'Pure business' at Biden-Putin summit: No hugs, no brickbats